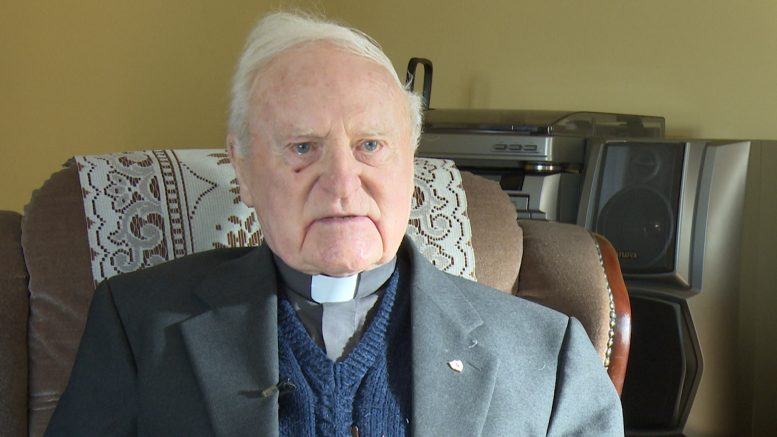 Canon Seamus De Val, born in Bunclody in 1926, is today celebrating the 70th anniversary of his ordination into the Priesthood.

On February 21st 2018, Canon De Val spoke to WexfordToday.com about his life in education:

After his teaching career came to an end, he was appointed Parish Priest in Oulart in July 1976 and remained in that role until he retired in September 1997. He returned then to his hometown Bunclody, where he continues to live to this day.

Upon his retirement he was appointed diocesan archivist, and has continued in this role ever since. The role has allowed him to continue to explore his love for history, and in particular the history of Co.Wexford. Canon De Val also maintains a keen interest in the Irish Language and in Opera.

Here is a documentary on the history of Bunclody, featuring Canon De Val:

Another interesting piece of information about Canon De Val, is that he is the designer of the Oulart-The Ballagh GAA Club crest.

We hope Canon De Val enjoys his remarkable milestone and we wish him continued health and happiness.

The Cheapest place to fill up in Co.Wexford

Be the first to comment on "Fr. Seamus De Val Celebrates a Remarkable Milestone"

McGrath Brings A Wealth of Experience To The Harriers

What is the “Wallace Report”?